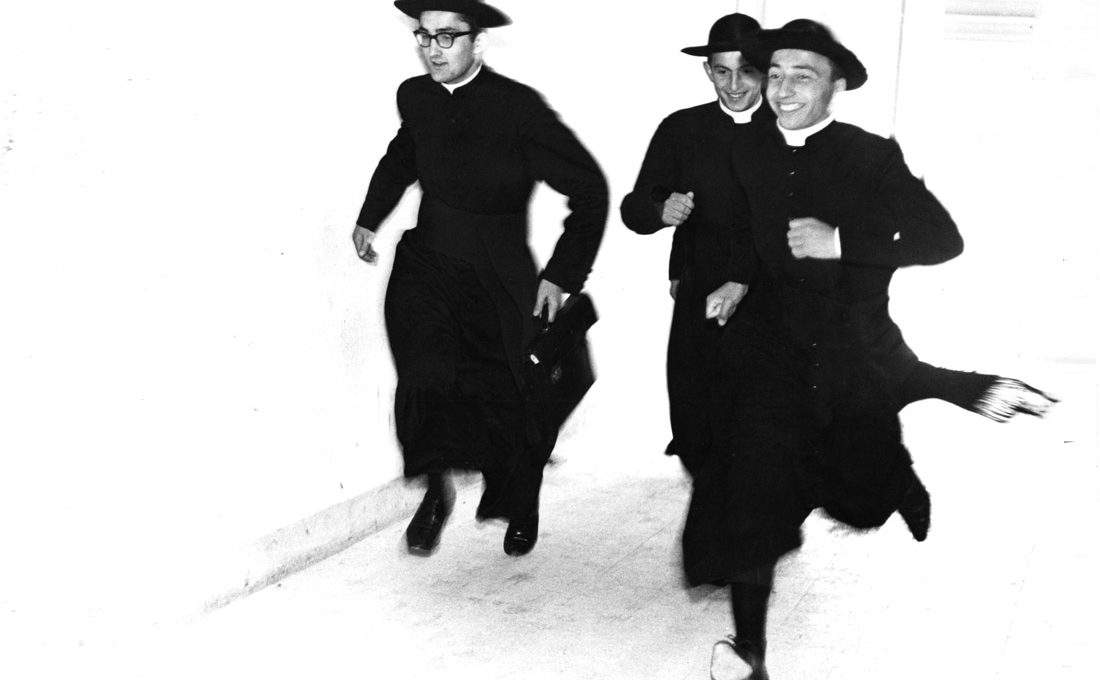 Filippo Sorcinelli, founder and creative mastermind of Italian perfume house UNUM, has launched a new fragrance with the unspeakably long name, _io_non_ho_mani_che_mi_accarezzino_il_volto_ (There are no Hands to caress my Face) that sticks out from the flood of recently released niche perfumes in many ways — even according to the standards of UNUM, a label that strived for the unusual and disruptive right from the start. The scent has been inspired by a photo series of Italian photography icon Mario Giacomelli, and the moving story behind these images. 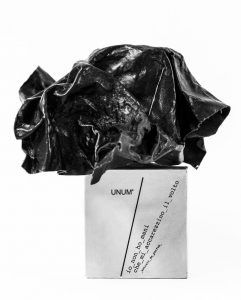 I Pretini — The young priests.

Back in 1961, Giacomelli visited the Episcopal School in Sengallia, as part of a project in which he photographed catholic seminaries in post-war Italy. He was moved by the young students and their life situation and began capturing them in their rare moments of leisure. The series of photos shows the future priests, often after long hours of study and prayer, playing in the snow or with a kitten, jumping about and dancing in a ring. These were simple pleasures to be experienced, and the photos are a stark contrast to the images that typically captured the youth of the 1960s — the ones who embraced and touted freedom and rebellion. The only act of cheekiness in the photos of the young priests are them smoking cigars, which Giacomelli himself brought them one Sunday.

Mario Giacomelli: searching for the truth behind the obvious.

But Giacomelli wasn’t only trying to capture the playful moments in the life of a young priest in training. In all his subjects, he was seeking the truth; trying also to understand what was lying behind the obvious. In this series, he seemed to be questioning the loneliness, away from their loved-ones and devoted to a life of sacrifice. It is also why he gave the series its title, inspired by a poem of the same name by Father David Maria Turoldo.

Although the extreme, almost cruel levels of discipline have taken many decades to be exposed in the media, we now know their have been instances of physical and emotional abuses within seminaries, schools, and other institutions run by the church as well as the state. The photos show outward expressions of fun and playfulness by the priests, but in those who view and really take the time to see beneath them, they evoke contrary feelings of sadness, melancholy and even pity. It is this conflict — between what is shown and what is felt — that makes the series so compelling, even today. 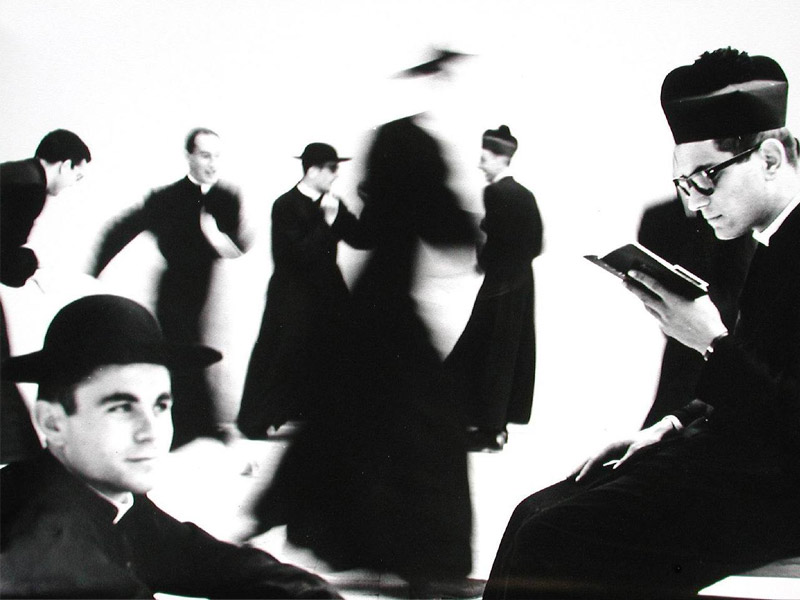 Mario Giacomelli: from the series There are no Hands to caress my Face. Via: www.pinterest.com.

A tender look behind the scenes.

Gianfraco Mancini was one of the young priests who appeared in the photos, and believes Giacomelli had a clear idea right from the start of what he wanted to examine through this series. “I always thought that behind this game, behind this series of movements, he was in fact looking into our community to understand the reason for that choice of solitude. Otherwise he would have chosen another title or left the original one, Pretini (Young priests). What we appear to be doing is playing; here there are no signs of suffering, in fact there are signs of fun, of apparent joy, but behind it?,” he says in an interview to Simona Guerra, Giacomelli’s son. “Even when he was making us play, in each of our faces he was always trying to capture the profoundest element that we could express; over and above our movements, his interest was always in our face. On the faces of human beings you can always see fundamental things. For him, photography meant capturing something profound in the landscape, in the human face… and there it ended: his world was this, and this was the way he was.” 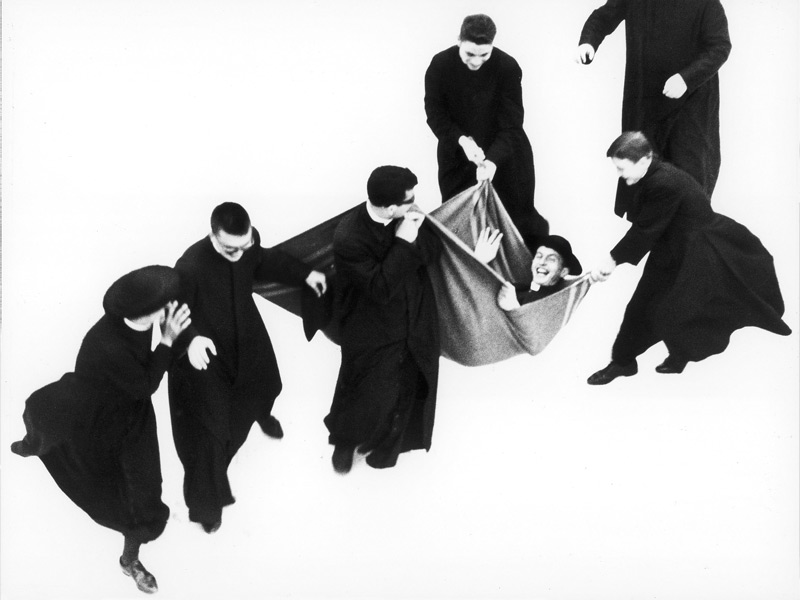 Dancing in the snow: Rare moments of playfulness. Via: www.pinterest.com.

Lauded by the public — sanctioned by the church.

Sadly, the smoking incident was not received well by the church authorities and brought an abrupt end to the photographer’s time with the young priests. Giacomelli’s visits to the seminary were approved by Don Enzo Formiconi, the rector at the time who was relieved of his post as a result of his decision. The photographs, however, were lauded by the public and came to be one of Giacomelli’s most iconic works. But it also didn’t fail to stir some controversy, as most people at the time felt Giacomelli was violating a sacred space that was dedicated to training and study. In the early 1960s, a time in which many were still fearful of criticizing the church authorities, Giacomelli’s photos were an act of defiance. Not only did he dare to tear down these walls and take us inside the church, but also provoked the public to question its customs and traditions by showing aspiring priests, who would soon be the representatives of the church and considered “men of God”, as vulnerable human beings. 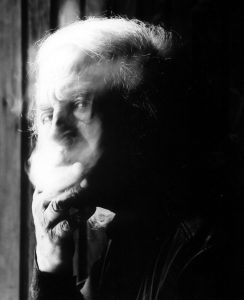 Sorcinelli hasn’t only been aware of Giacomelli and his work, but also met him as an early teenager while working in a printshop. One of his duties was to deliver certain materials at Giacomelli’s studio. “I was right away fascinated by him, his hair as a white cloud, the cigar he smoked, the tobacco and ink smells,” Filippo remembers. These encounters, along with the photo series of the young priests, would serve as the inspiration behind _io_non_ho_mani_che_mi_accarezzino_il_volto_.

But how to turn all this into a perfume, how to do justice to such a complex story full of opposing emotions and motifs?

How controversial photos from the 1960s inspired the latest UNUM fragrance.

Sorcinelli’s picked particular details, such as the smell of Giacomelli’s bag of tobacco and photographic films, the leather and metal of the camera or the incense used in liturgy, to create an olfactive reduction of the story. The stylish fragrance contains top notes of petit grain, bergamot, galbanum and myrrh; middle notes of cedar, geranium, clary sage, cinnamon, styrax and ylang ylang; and base notes of incense, benzoin, tonka bean, tobacco, amber and sandalwood. On first impression — and perhaps with the understanding of its story and inspiration — the incense, tobacco and sandalwood notes immediate transport wearers to that snowy Sunday, when a group of young Italian priests tried their first cigars. 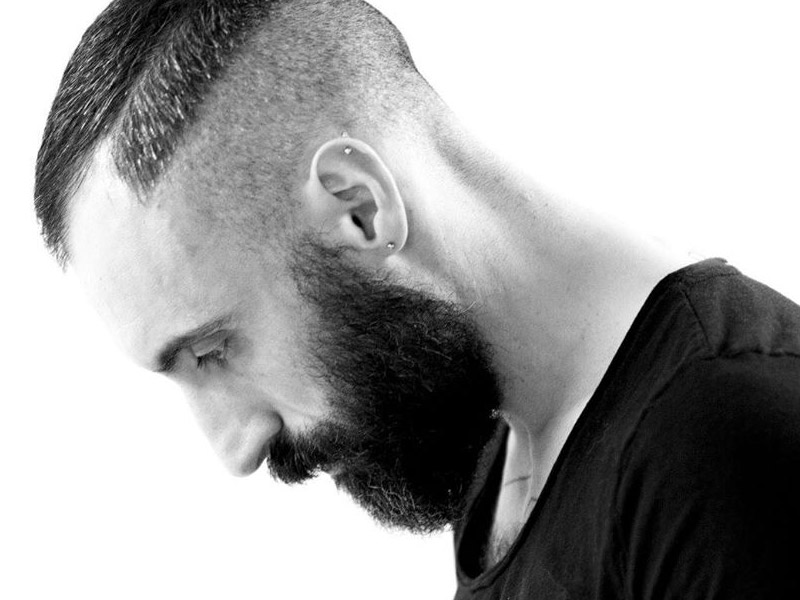 The bottle itself is a tribute to Giacomelli; created with a special metallic coating that is similar to the photographer’s trademark camera. The cap is coated with an exclusive double leather material, similar to that of Giacomelli’s bag of tobacco, that can be shaped to almost anything. It’s draped around the cap to resemble the cassocks that swayed while the young priests danced in the snow, which became emblematic of the series. To Sorcinelli, each perfume he creates is a complete work of art. _io_non_ho_mani_che_mi_accarezzino_il_volto_ is no exception, with careful attention to detail, both the fragrance and the bottle come together to recreate the story of Giacomelli and the young priests.

UNUM is about Spirit, and not only about spirituality. In this fragrance, it seems to effortlessly capture both — the spirit of the master, his subjects and his work — in an an elegant retelling of a story behind one of the most delightful and controversial photographic projects of the 1960s. 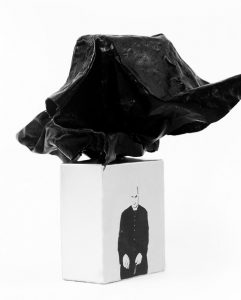