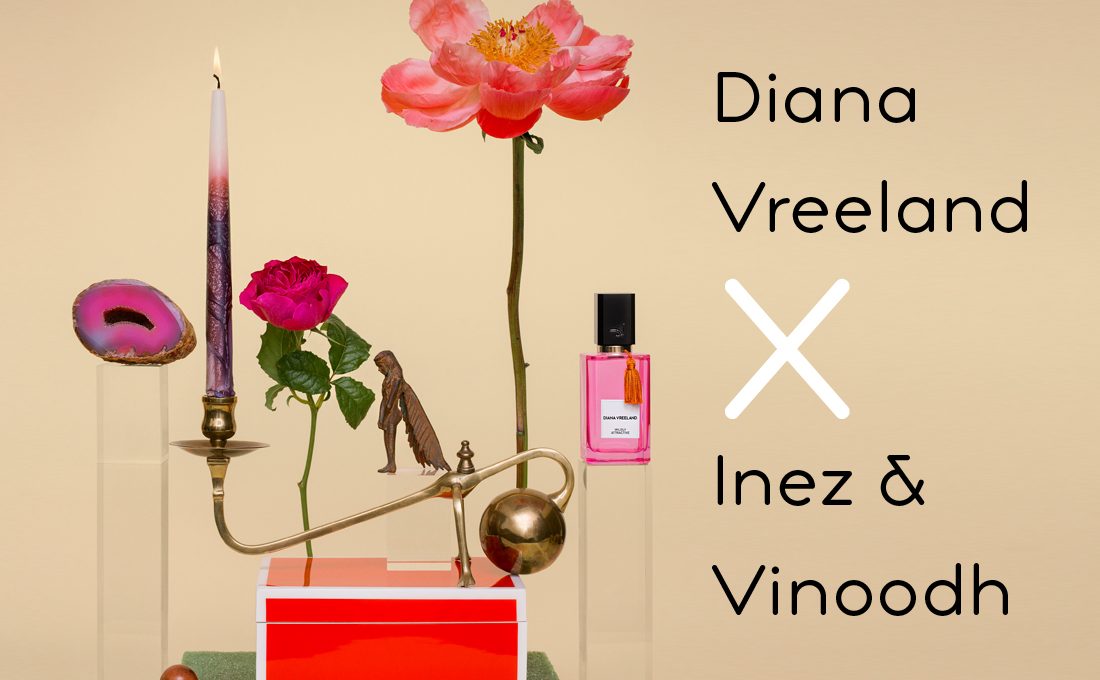 Immerse yourself in a series of magical still lifes shot by Inez & Vinoodh for Diana Vreeland Parfums. We spoke to the photographers about the project and asked brand founder Alexander Vreeland what sparked this collaboration. Find out more more about Diana Vreeland, fashion magazine genius!

Alexander Vreeland — grandson of the legendary editor of both Harper’s Bazaar and Vogue, Diana Vreeland (1903–1989) — has been friends with Dutch artist duo Inez & Vinoodh for quite some time. While all having dinner one evening, he presented his new fragrance to the pair, who were so smitten by the juice that it sparked an immediate offer to create images inspired by each fragrance from the line.

Composed of objects that refer to elements in Ms. Vreeland’s own world, the editorial still lifes are based purely on what each scent embodies. “There was no brief,” Alexander Vreeland explains about the collaboration. “I sent them a bottle of each of our 11 Diana Vreeland eau de parfums as well as an olfactive description and the mood board that we had created for each fragrance.” 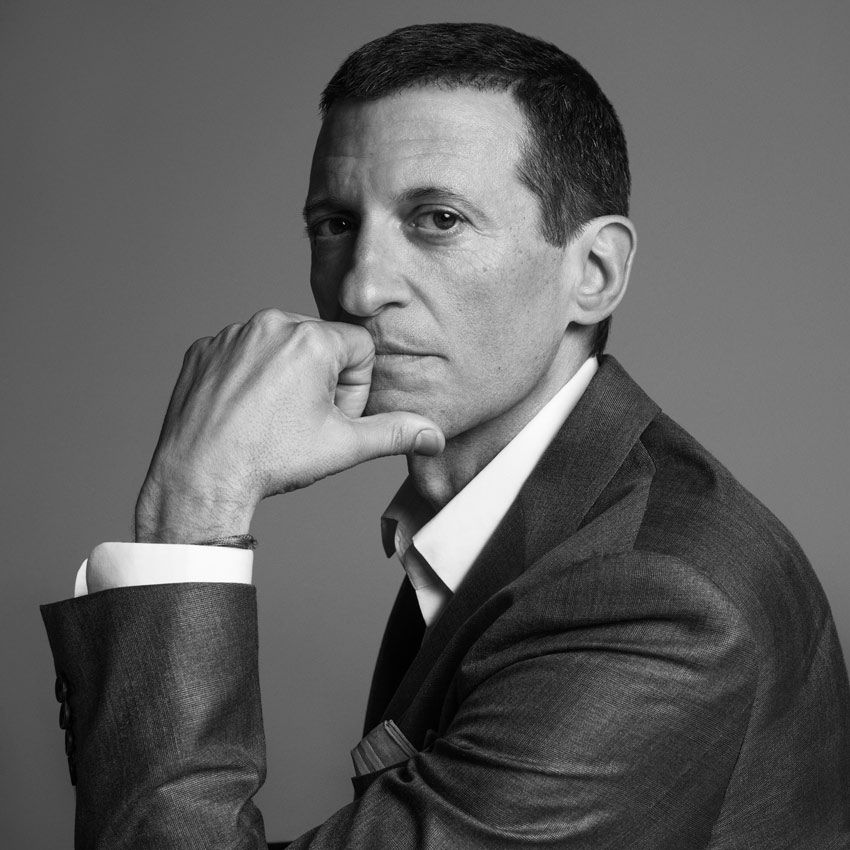 Alexander created the brand in 2014 as an homage to his grandmother, who even 30 years after her death continues to inspire today’s editorial world. Legendary photographer Richard Avedon once called her “the only genius in the history of fashion magazines.” She liberated fashion photography from uninspired, stiff poses and ignited an explosion of images and ideas. Pretty much everything we love about modern fashion magazines has been of her invention.

The still lifes by Inez & Vinoodh are eclectic and opulent with a pinch of quirkiness. And, there is a lot of red. Did this remind Alexander Vreeland of his grandmother’s iconic style (red was always her favorite color)? “This collection of images is so Diana Vreeland,” he confirms, “so elegant and so unique. Her sense of style, her love of the unexpected, her eccentricity, and her humor are all reflected in these images.” Would his grandmother have approved of the still lifes? “Absolutely! The images have such a dreamy quality and Diana Vreeland was all about dreams.” 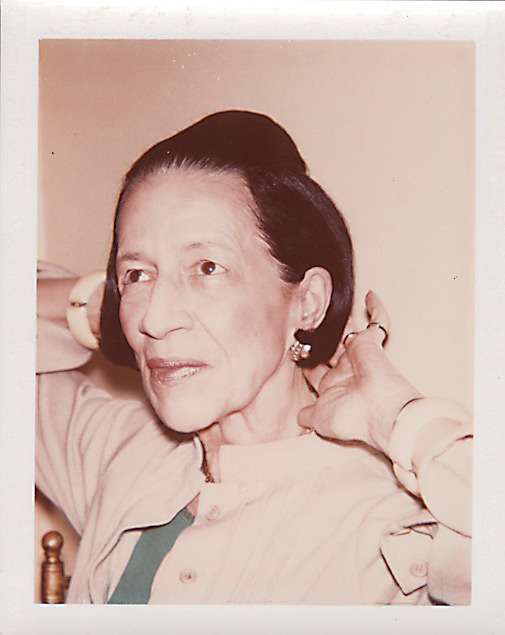 It’s very likely the style icon and photographers would have gotten along well. Just as Ms. Vreeland, who loved to blend the once separate realms of fashion, art, and entertainment, Inez van Lamsweerde and Vinoodh Matadin wanderer between worlds. Originally trained as fashion designers, they soon developed a unique and revolutionary approach to fashion photography informed by the arts, movies, and many other muses. A year-long residency at MoMA PS1 in New York City, a collaboration with choreographer Stephen Galloway, and directing videos for Lady Gaga and Rihanna are among a long list of frontier-crossing activities. In 2007, they even produced the notorious Pirelli Calendar.

Portrait photography is a central part of their work. Clint Eastwood, Mickey Rourke, Shirley MacLaine, Tilda Swinton, and Julianne Moore can be counted among the celebrities they’ve captured for the New York Times. And then there’s their soft spot for perfume: a collaboration with Byredo in 2013, and stunning campaigns for Chloé, Thierry Mugler, Viktor & Rolf, and Narciso Rodriguez give Inez & Vinoodh a proven track record in illuminating olfactive beauty. Perhaps none of these projects have been as personal as their work for Diana Vreeland Perfumes. Their admiration and respect for Vreeland’s work and her extraordinary life is present in each shot.

Fun fact: the names of all offerings from the perfume line are inspired by Diana’s affectation for superlatives (Perfectly Marvelous, Outrageously Vibrant …). This certainly applies to the latest addition from the line, Wildly Attractive, an exotic floral Oud fragrance. The nose behind this concoction is master perfumer Carlos Benaim. As with all other Diana Vreeland scents, Wildly Attractive comes in a beautiful clear-cut flacon designed by the legendary Pierre Dinand. Dinand is responsible for countless iconic perfume bottles such as Opium by Yves Saint Laurent and Obsession by Calvin Klein.

By far the best thing about Wildly Attractive is that you, Scentury readers, have a chance to win one of the radiant pink bottles. Just enter to win here. 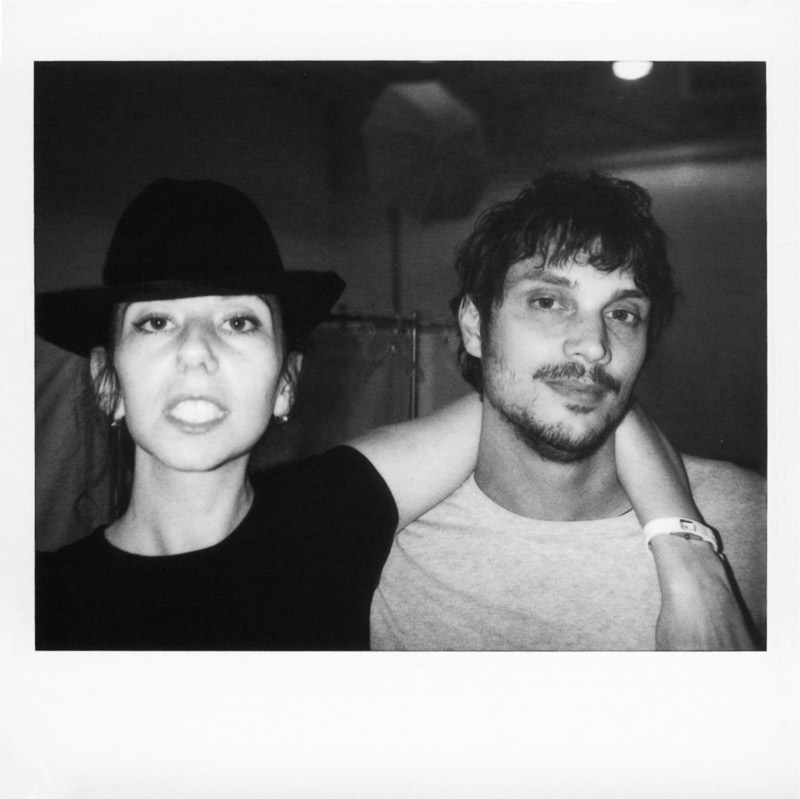 We had the chance to chat with Inez van Lamsweerde and Vinoodh Matadin about their collaboration with Diana Vreeland. Find out why love this brand and perfume in general.

Scentury: What is the first word that comes to mind when you hear the name Diana Vreeland?

I&V: Both the fragrances and the imagery are about eccentricity, vitality, and exoticism just like Ms. Vreeland herself.

SC: Diana Vreeland had a talent for bringing out the best in photographers, stylists, and models. Many of the editorials she commissioned became iconic beyond fashion photography. What do you think her secret may have been — freedom… trust… passion…?

I&V: All three. She had a fundamental respect for art and artists. Fearless and enthusiastic about creativity and expression, Diana would nurture the ideas, allowing them to really blossom.

SC: This isn’t the first time you’ve collaborated with perfume brands: In 2014 you shot a campaign for Chloé and in 2013 you co-created a fragrance for Byredo. Am I right in assuming you have a special relationship with the olfactive world?

I&V: Of course. For us, as I assume for most, there is a direct connection between scent and sight. Fragrance very often triggers images in one’s mind or conjures up very specific memories.

SC: And do you remember the very first fragrance you purchased for yourself? 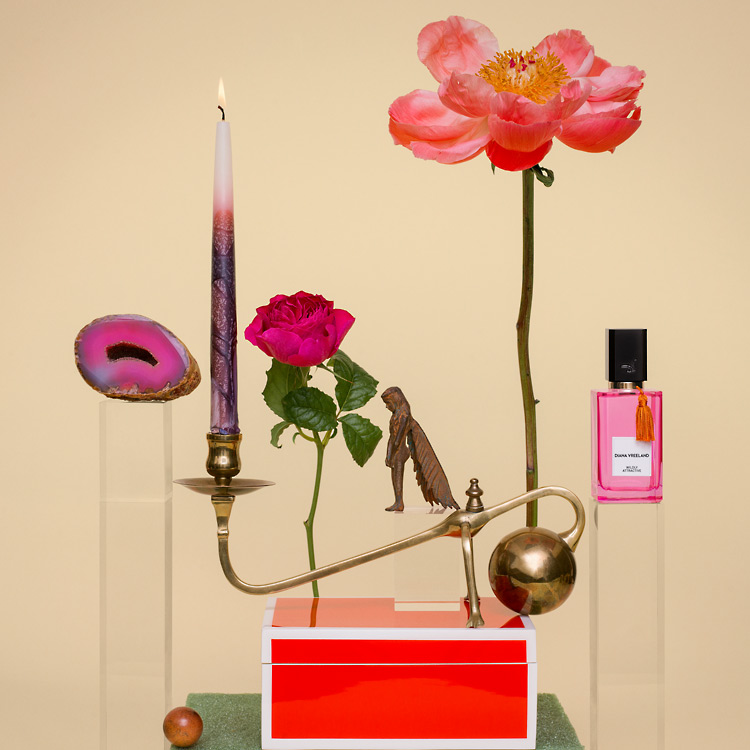 Born into a wealthy Parisian family in 1903, Diana Vreeland got in touch with a smart and glamorous set of intellectuals, artists, and celebrities at an early age — her riding instructor was Buffalo Bill. Not exactly what one might call a classic beauty (the photographer Cecil Beaton once called her “an elegant crane picking her way out of a swamp”), she soon discovered that esprit and style can be so much more appealing than prettiness alone. She always took a liking toward unconventional beauties such as Cher, Anjelica Huston, or Barbara Streisand and using celebrities as cover models was one of many firsts that can be credited to Vreeland.

After her family moved to the US, she started her publishing career with a magazine column titled “Why don’t you?”. Some of the don’ts she suggested were washing your children’s hair with champagne and smoking cigarettes branded with your own monogram. All this in the middle of the Great Depression. Her legacy includes a memorable collection of memos she circulated at the editorial office, a mix of genius and oddity that were published as a book by her grandson Alexander in 2013. Some of our favorites are: “The bikini is the most important thing since the atom bomb.”; “I repeat, again, the importance of knee socks.”; “Lettuce is divine, though I am not sure it’s really food.”

Diana Vreeland Parfums are available in selected stores worldwide, such as Bergdorf Goodman in New York City, Harrod’s in London, Alsterhaus in Hamburg, and Oberpolinger in Munich. 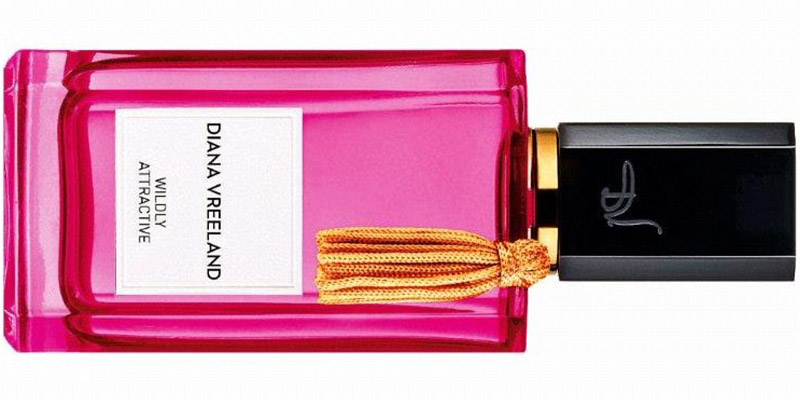