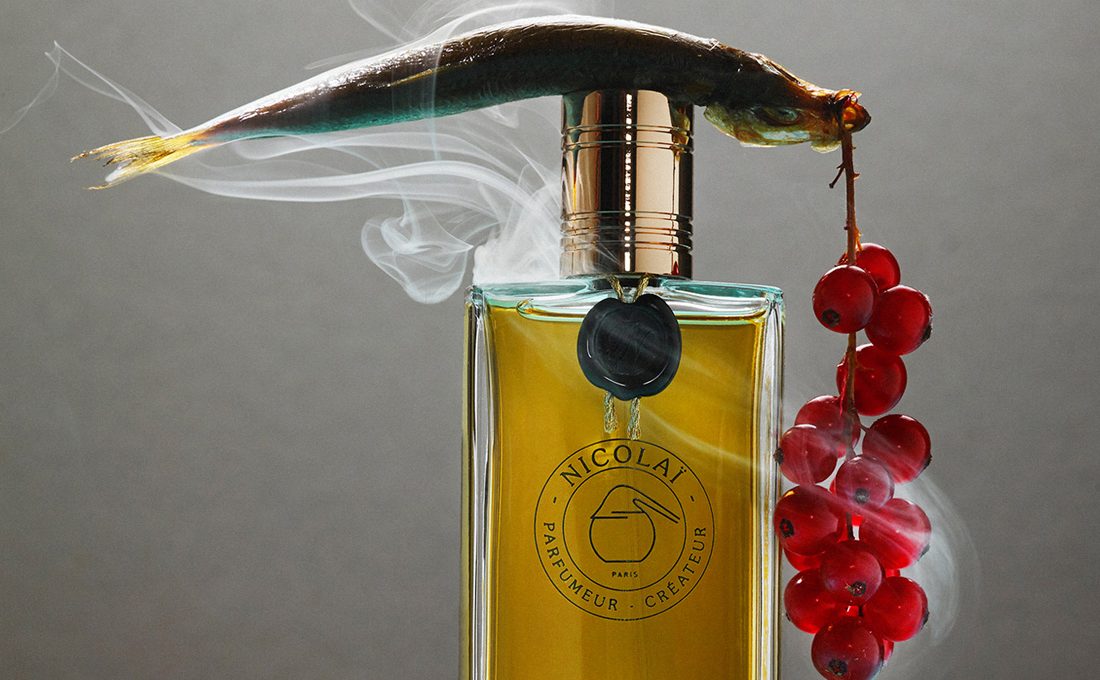 Autumn is the time to savor the harvest of a long and hot summer: mellow fruits, sun-soaked memories, and wines of gold and crimson. It is also the season when we look inward to reconnect and calibrate. While you’re tucking in, enjoy our pick of 10 substantial autumn scents — brought to you in a collection of olfactive micro-stories accompanied by an inspiring photo shoot with Paris-based Roberto Greco who is celebrated for his elaborate still lifes of luxury goods and perfume in particular. 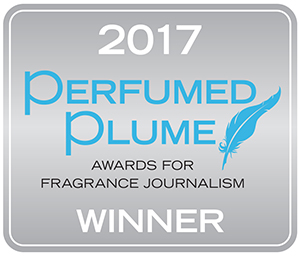 This feature is a proud winner  of the 2017 Perfumed Plume Awards in the category “Visualization of Scent Stories”. 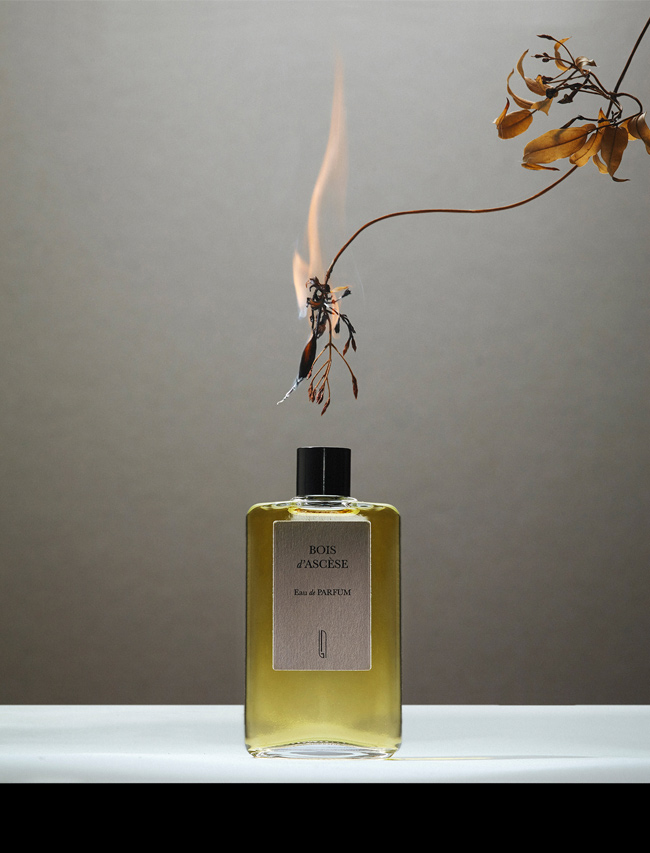 A piece of ancient wood, as hard and impenetrable as stone. Having risen from the depths of the sea, a storm cast it ashore, where it was scorched by the relentless sun, until once again it was buried by sand and soil. Finally, unearthed by convulsion and tremor, entrusted now to the fire, it releases sounds and memories carried across thousands of years, alighting in a trace of white smoke veering heavenwards.

A spiritual incense and wood fragrance from Australian designer Naomi Goodsir, who first made a name for herself with fantastical couture head pieces. 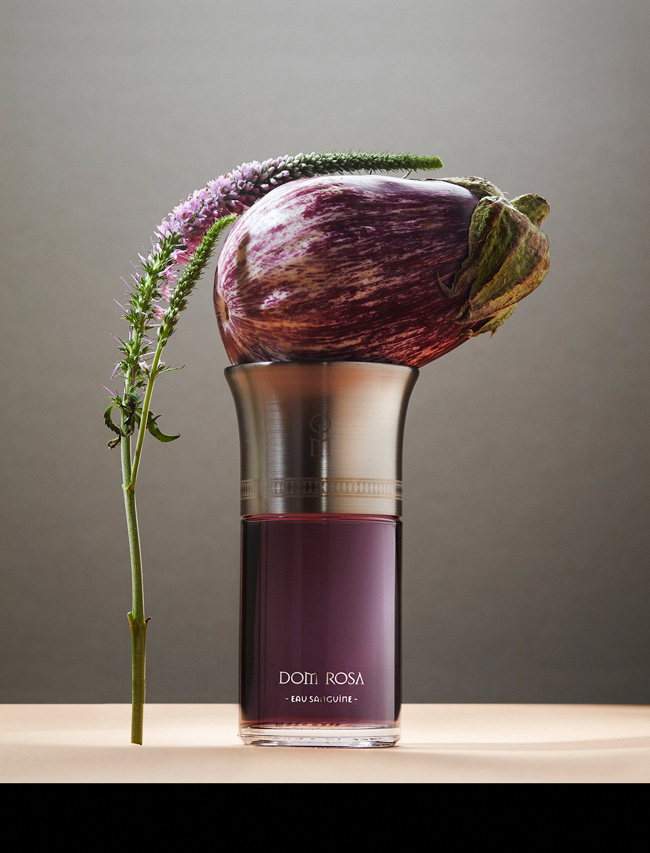 A glass of red wine sits on the kitchen table beside a well-thumbed book, dog-eared and held close by many anonymous owners through the years. Across the backyard someone throws open a window: a sunbeam refracts off the screen, catching the wine glass just right. A deep rose-colored shadow is cast, illuminating the cover of the book and the hand that rests upon it.

This unique composition inspired by viticulture preserves the warmth and vitality of a long hot summer for the colder seasons. 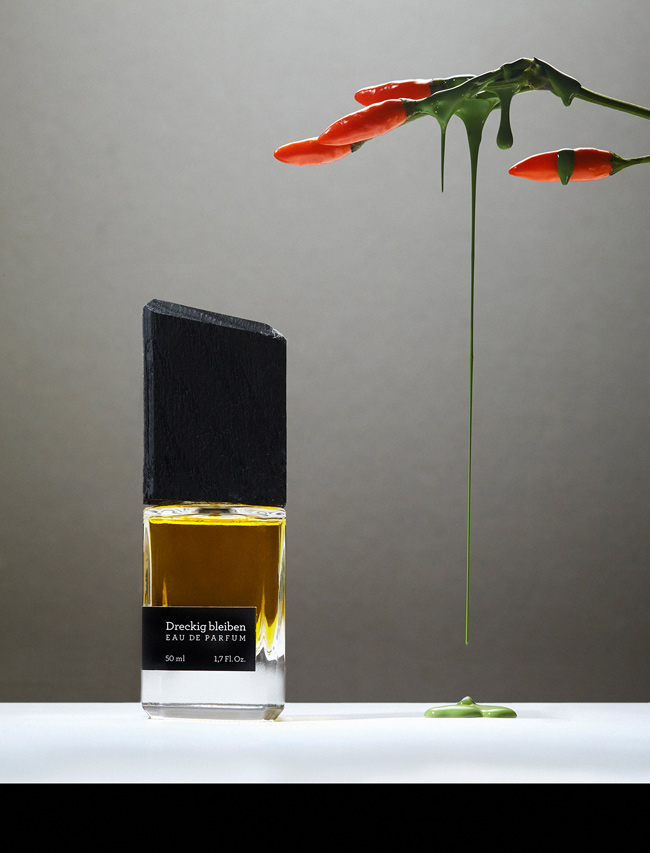 The water she had frantically rubbed into the eggshell-colored fabric had made it worse: brown, gray, and black blotches on a now semi-transparent crepe de chine skirt. True, it was the client who knocked over the tablet with coffee and tea, that greedy old bastard, while she tried to deliver the most important presentation of her career: “Sorry Honey!” But slapping him in the face? Jesus, he’s the fucking CEO! Now she was trapped in the ladies room, everyone waiting for her to — apologize, cry, or just die? She suddenly noticed that smirk on her face. “Stop that!” she snapped at the mirror, but the laughter forced its way out and she just couldn’t stop until her breath was nearly gone. Then, a nameless tranquility washed over her. From that day on, she was a legend: the high potential who threw it all away by punching the client and strutting out through that marble entrance in her dirty suit and tousled hair — untouchable and aloof, mirroring her counterpart across town, the goddess of victory at the Louvre.

A dark woody balsamic scent with a dash of punk that helps you stay true to your roots. Attitude in a bottle! 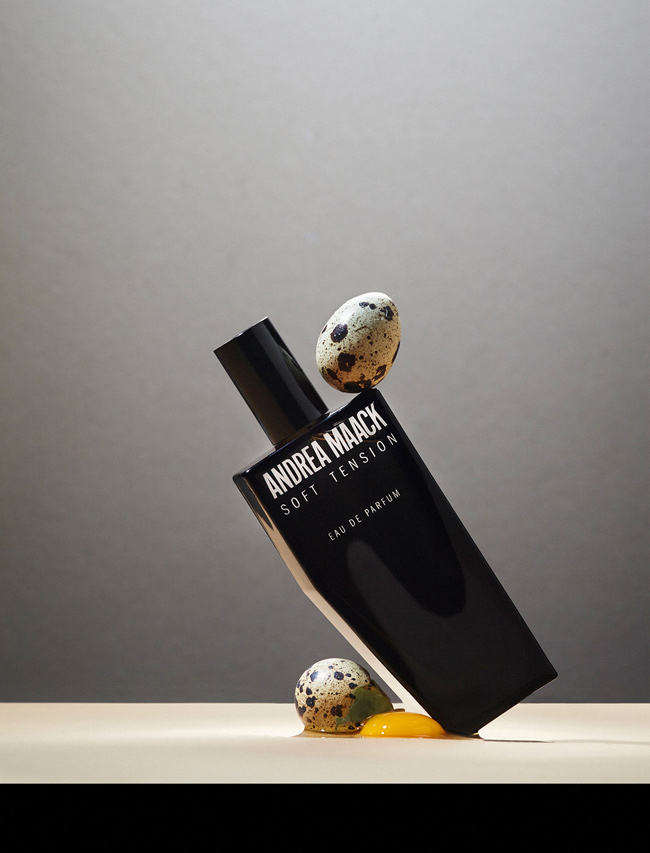 I can’t see my hand in front of my face. No front, no back, no inside or out — just soft misty fog. And inaudible voices in muffled tones that can’t be picked up. Then, suddenly, there’s a scent that punctuates, a thin light green thread weaving through the white. “Follow your nose!” one voice murmurs . . . What have I got to lose?

A mystical creation by Reykjavík-based installation artist Andrea Maack for her eponymous collection of fragrances inspired by her native Iceland. 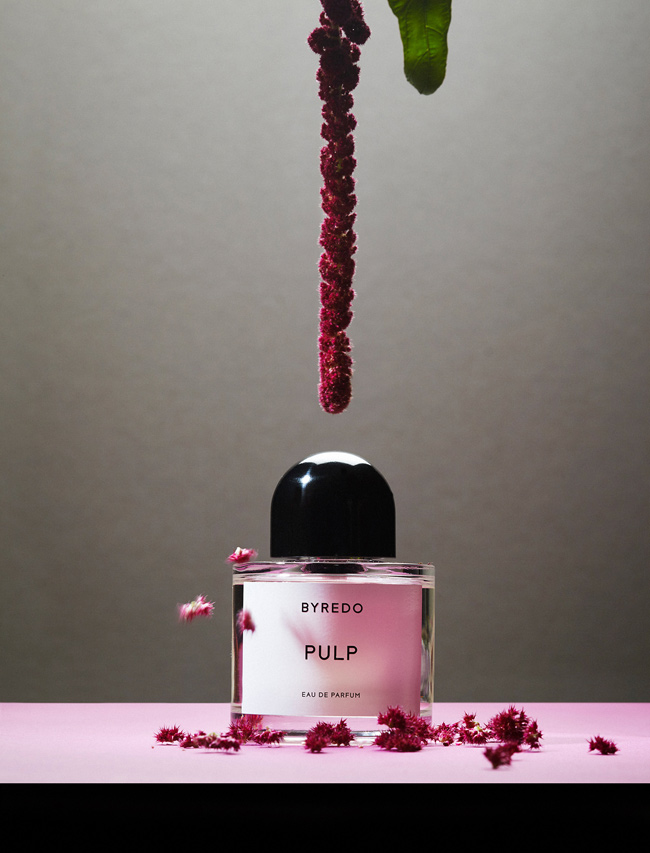 A bunch of dark red grapes, some golden plums, and a couple of deeply overripe purple figs — the plate thoughtlessly dropped on the seat of the leather sofa. He watched her flying blindly through the waiting area in her tight white jeans, her eyes glued to the screen of her smart phone. It was bound to happen. He could warn her, but then: Why should he?

A dramatic composition focused on the idea of ripe, sweet, shapeless mass of fruit. An unruly and intense savor. 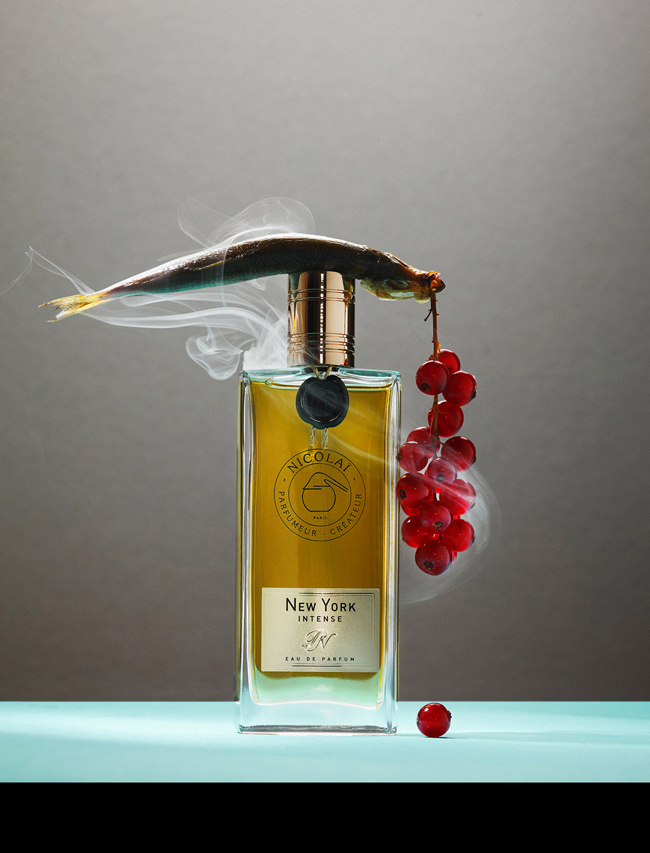 “Autumn in New York / Is often mingled with pain / Dreamers with empty hands / Dreamers with empty hands …” Frank Sinatra’s voice stopped on the same note over and over again, as did Billy May and his orchestra. When Mrs. Abbadelli stepped through the half-closed door into her neighbor’s apartment, it was completely cleaned out except for the turntable and a note beside it: “Please feed the cat! Rick.”

Patricia Nicolaï’s homage to a city that has endless stories to tell. Full-bodied, rich, and stimulating: a fragrance for all who opt to be New Yorkers. 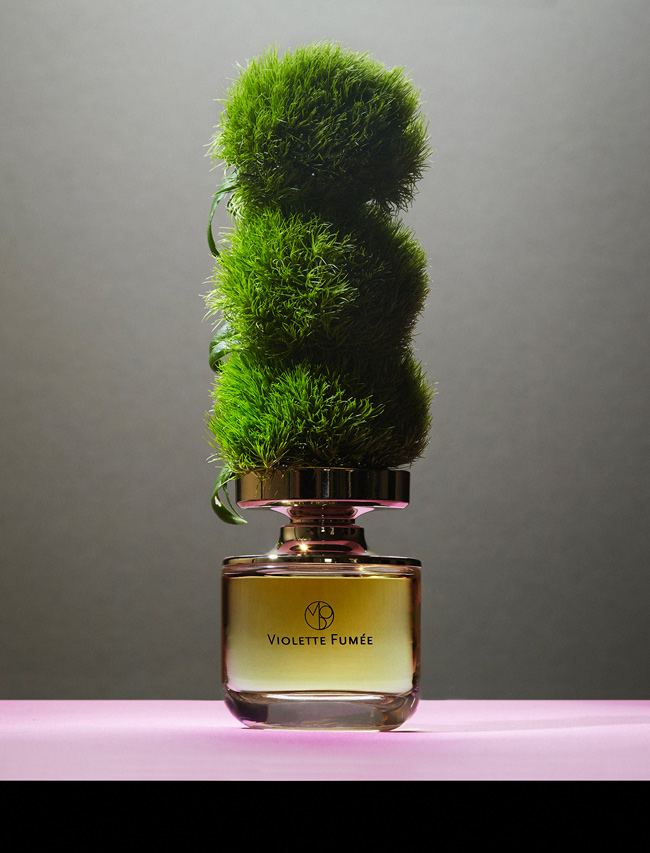 “Nothing has changed,” the housekeeper said as she closed the door. Victoria stopped halfway between the entrance and the circular table with the beautiful marquetry that delineated the midpoint of the hall. “I can see it, Maria — fresh violets every day and the scent of his tobacco in the air. Nothing has changed. Except that everything has changed.”

This warmly smoldering scent evokes a sensorial love for luxury, and invites you to feel, dream, travel and remember. 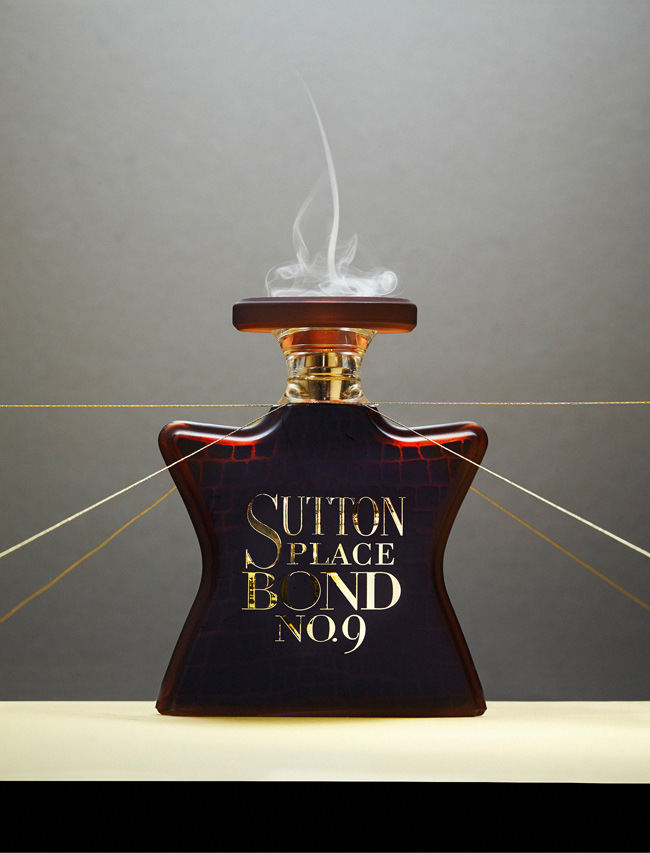 My father’s briefcase has seen war and peace, and many things in between. Draft contracts, secret assignments, and yes, love letters, travelled in this bag that toured the globe numerous times around. I love the thought that some of the small souvenirs Dad purchased for me in the souks of Agadir or on the Ginza in Tokyo may have traveled cheek to cheek with a sealed note to Khrushchev or Farah Diba — and let’s not forget those couple of Cohibas he smuggled back from Havana. 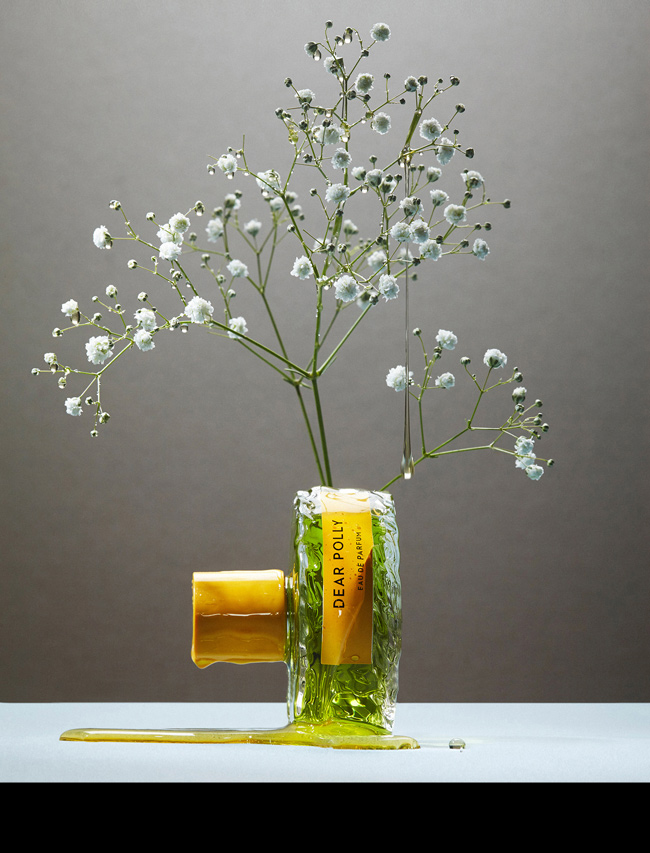 A yellowed sheet of paper, covered in pale blue lines by a delicate hand, though one that hastily scrawls as the writing becomes almost illegible near the missive’s end. “Dear Polly,” it starts . . . until finally, at the very bottom of the back page: “I decided to break my promise and confide in you this secret that lies heavy on my heart.” Silence . . . Is the next page lost in time, or was it never written? A secret well kept!

A piquantly punctuated concoction that immediately warms the skin. From the impressive perfume line of New York-based Swede Jan Ahlgren. 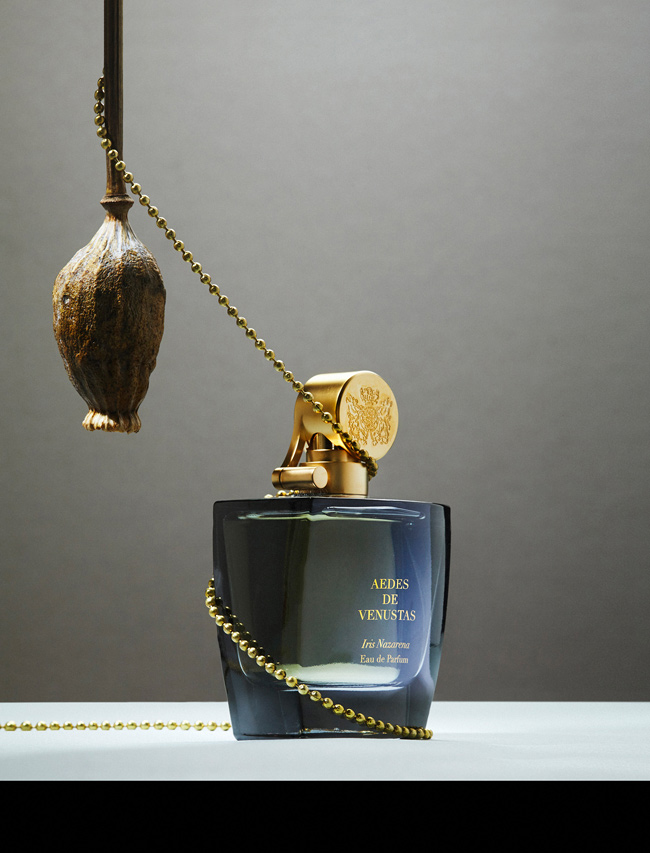 The lock on the door of the cabin was rather a symbol of righteousness over a serious deterrent to burglars. With not a soul in sight for 20 miles, chances were slim that it would ever be put to the test. While Sarah was fiddling around with the rusty keys, Guy slowly leaned forward until his nose nearly brushed against her curly hair: a day’s aroma of sun, wind, knee-high prairie grass, and bridle leather.

Elegant in an unspoiled way, this sensuous beauty by New York’s Aedes de Venustas is best savored on the skin of someone you love.